You are browsing the site archives by date.

This is an unfinished track I created, loosely in the Garage genre, made on the Korg EM1 & microKorg.

Nothing serious, just some beats layered over a few lines of Imogen Heap’s “Hide & Seek”.

“Tilt” needed remixing into a proper track, so I lost the acid basslines & worked on a new synth part to go with the updated drums.

A short track created on a warm sunny evening in about 2 hours.

Moby Gets the Hannibal Re-Boot A “re-boot” of my drum and bass remix of Moby’s Go from 2002. Using the Twin Peaks theme from Go and some choice quotes from the film Hannibal [2001]. 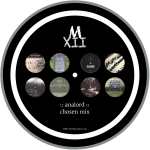 Analord Mixtape I was disappointed by the “Chosen Lords” compilation album as it seemed to bypass some standout tracks from the Analord series. So I made my own mixed version…